We have floors! And furniture! And before and afters!

AFter walking on subfloor for almost two weeks, the flooring installer (contracted via Lowe's) was out last Weds and Thurs installing our Pergo Max Crossroads Oak...I may have rolled on the floor when the installer wasn't looking.  If you follow me on FB/Instagram, you know I did take a selfie whilst reclining on it. 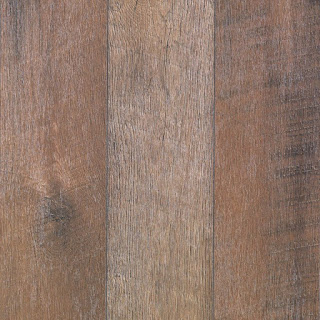 We chose laminate over solid wood for two reasons: 1) price, and 2) durability.  We had gorgeous Bellawood rustic red oak solid wood flooring in the old house, and paid a pretty penny for it for a tiny bit of square footage.  It also dented and scratched pretty easily.  We knew we wanted to replace the flooring in this house but did NOT want to spend over $10k to do so.  We checked out the Pergo during a Lowe's sale after we had bought the house and took advantage of the $.89/sqft install deal the offered.  We had almost 1000sqft of flooring installed...that's some serious square footage. I can attest to its durability...I dropped a heavy can not a half hour after the man had laid it down in the kitchen and not a dent or scratch.  BUT if I ever do scratch or dent it, a Sharpie will take care of the evidence. Winning!

Hubs was very eager to get the furniture back into the house (movers put it in the barn for us) so as soon as he got home Thursday night, he nailed the base moldings back on (installer did a great job of getting the flooring as close to the walls as possible so we did not have to add quarter round to the base to hide the gap...just a couple of areas the gap barely shows but hidden by furniture) and we gave ourselves hernias moving the sleeper sectional, leather ottoman, media cabinet for the 55" tv and dining set back into the house.  In 50mph winds.  Fun.

Here are a few before and after photos...I have yet to get all of my decor items on the walls but there is still quite a marked change in what the house looked like when we bought it and now, with just paint, new flooring and our furniture of course.

Living room before (not my stuff in before photos by the way): 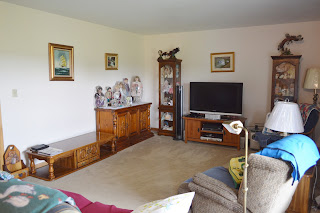 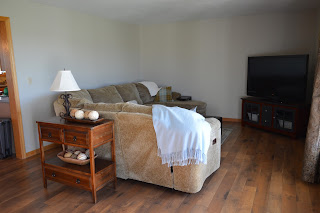 The sectional is not against the wall as we still have new wall lamps to hang.  The console table may look too small but the end of the sectional contains a recliner...my recliner...so wouldn't be a good idea to have a table with breakables behind it as the back moves.  The sectional also needs to come away from the tv wall and towards the open walk space a bit instead of against the wall on the chaise side...like sitting in the front row at the theater. 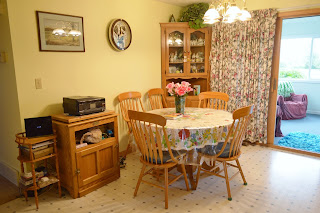 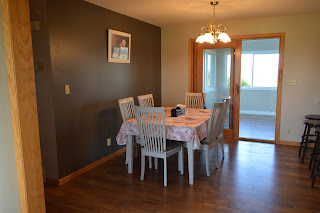 Again, need to hang my decor on the wall and do something with that light.  It needs to be swagged (word?) over about a foot to be under the table but we're not sure there is enough chain or even electrical wire to do that; if there is (chain can be bought) then I will upcycle by painting the brass either black or turquoise (not even close on the color spectrum, I know).  I will be upcycling all of the lights for now with my trusty can of black spray paint...just need to talk Hubs into taking them all down for me. 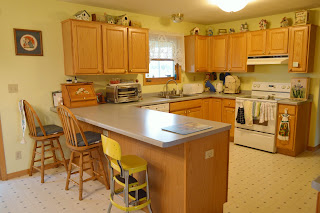 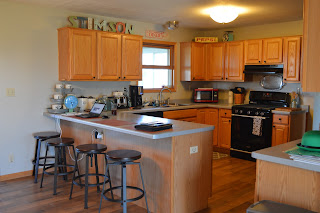 This room...even though it is LOADED with oak, I am LOVING IT!  I haven't gotten the range bank of upper cabinets decked out yet (waiting on Hubs to cut me down some more 1" boards...maybe might be a good time for me to learn how to use that miter saw) but the other two banks have gotten "the treatment".  Paint, flooring, bar stools, appliances, knobs...this room has gone through the most changes so far and just cosmetic.  The oak cabinet finish is a bit worn so a probable paint project will ensue come spring and not before...I am just about painted out at this point. 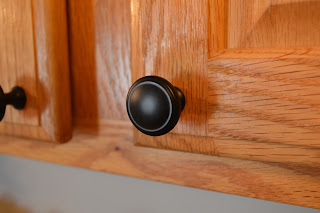 99 cents off Ebay with free shipping...score! 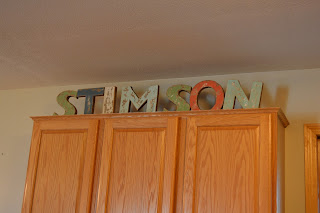 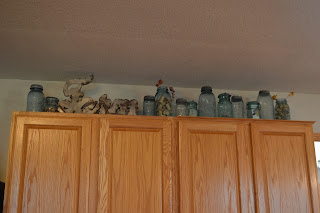 After the flooring was put down, we knew the fridge was not going to fit under its cabinet again and that it would need to be taken down.  Wow...not so easy!  They were not only screwed to the bank of cabinets next to it and the wall (given) but also a metal strap had been stapled about 50 times to the BACK of it. 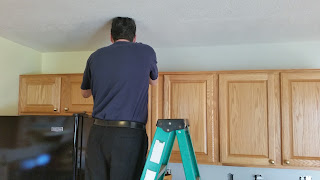 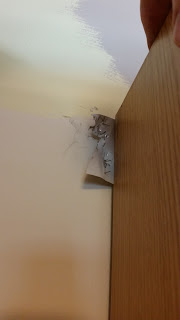 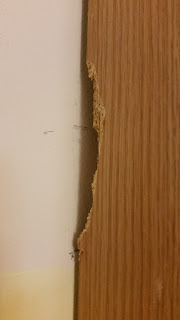 The damage...not visible unless one stands on a ladder

So I threw my upcycled white rooster and a vintage crate with bottles up on top to take up some of that dead space: 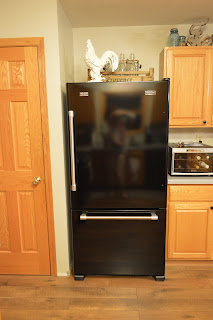 BIL came over last Friday and helped get the rest of the furniture into the house.  I have yet to work on unpacking the office and bookshelf boxes upstairs yet... I decided to paint the last room in the house that will be touched with a paint brush (hopefully) until spring (well, maybe): 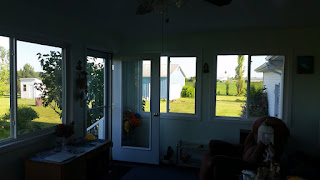 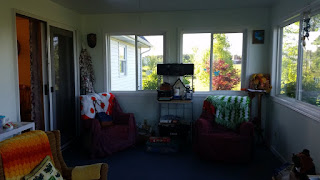 Sunroom after (one coat of paint): 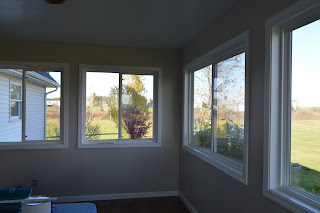 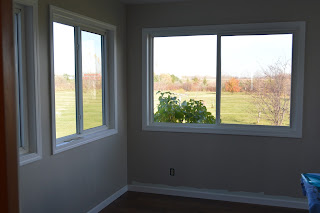 Searching for some kind of furniture, either a gently used sofa and loveseat I can put new covers on or a wicker furniture set.  This room got the Revere Pewter treatment over its previous light mint green. It also received new flooring, which it used to sport blue commercial carpet that was glued solid to the subfloor so new subfloor was laid right over top of it by Hubs to prepare for its new cover.  We he still needs to crawl under and insulate from underneath before the snow flies...still not sure he can fit through the access door.

It's feeling more like home every day...loving this Thumb life.
Posted by Unknown at 1:14 PM