Clean up, clean up, everybody clean up!

Now I have that stinkin song in my head.

But this past weekend, which was GORGEOUS by the way, was time for a bit of clean up on the exterior...even though nothing has been unpacked upstairs yet (waiting for snow days I guess).  There are many trees and flowers that will be transplanted to the front landscaping next spring (when they bloom and I can tell what it is) but a couple of bushes/trees/vines/whatever they were needed to go.

First up, this bush/tree/vine that was dead inside and alive on the outside next to the garage: 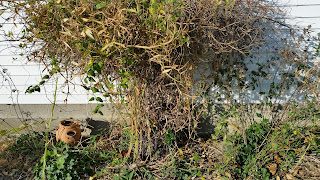 I started with these: 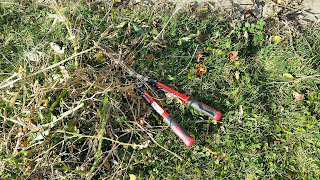 Pretty sure these haven't been sharpened since the beginning of time (hint-hint Hubs) and weren't getting me anywhere quickly.  Not that cutting down a bush/tree/vine thing is a quick job...this thing was a monster and had obviously been planted quite a while ago from the thickness of some of the branches.

So I turned to my next implement of choice (or what I found on the shelf in the barn that looked sharp): 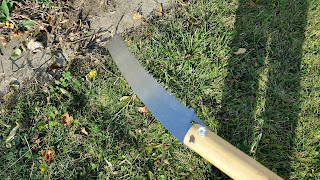 Not sure what exactly this is, a saw of some type (I was using it like a machete, which wasn't the best of ideas since in the end I broke the blade off of the handle...in my defense, this was a Hubs special that he put together).

Finally I got to this: 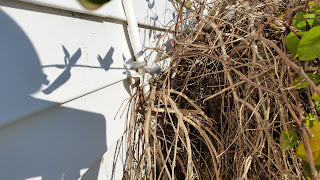 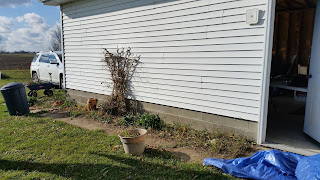 And cleaned up all of the weeds as best I could in 30mph winds.  We'll see what this does now that it's been cut back in the spring...if anything, I have a great arbor that is attached to the garage wall to grow something else if it doesn't come back to life.

Moving on to the front of the barn...

I didn't snap a picture before I started hacking, but found an old pic I took at the time we were thinking of buying the place: 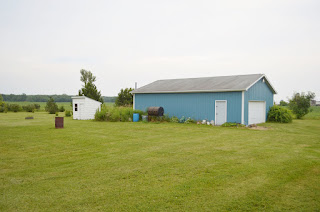 That huge bush/tree/vine to the right of the barn door, which now was a lovely shade of yellow on the top and pretty dead underneath.

So I started hacking away. 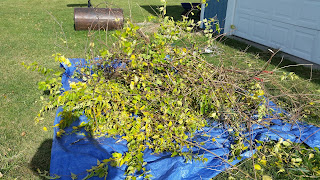 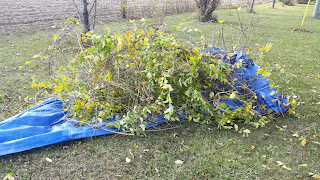 Until it was completely cut down and I found this underneath it: 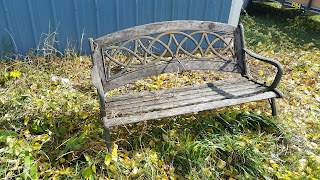 Sweet!  It's a bit weathered but with a bath and a coat of paint...good as new.  Also found some Iris hanging out under the bush/tree/vine.  Again, will see if this comes back in the spring.

While I was hacking away at the back yard, Hubs was doing this to the sunroom floor: 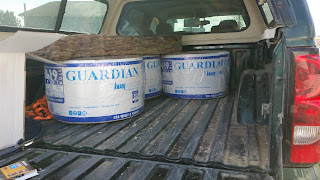 Wish I'd snapped a pic of him in his white plastic jumpsuit and mask but I was busy breaking his trimming implements.  The sunroom was not used during the winter as the former owners flew south (smart people!), there are no heat vents nor was the floor ever insulated from underneath (walls and ceiling, yes).  We had the new flooring installed in this room as well for continuity (plus there was stained commercial carpet completely glued to the subfloor so needed to be covered with something).  The only thing that had Hubs worried about was the access door and if he would fit through it... 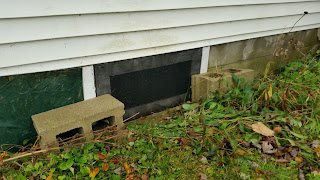 Hubs is thin but 6'4".  He was able to shimmy that big body in and out of the hole and install the R19 insulation with plastic sheeting stapled over the top of it in one afternoon. After he sprayed mosquito killer for the colony that had made it home.  And what a difference it has made in this room.  We have no plans right now of running a heat vent off of the future new furnace (another story) but just keeping the patio door and window above sink open as well as the eastern morning/early afternoon sun shining into all 7 windows keeps it quite toasty.  I have my gently used cast iron electric fireplace to bring in from the barn that will add heat when it gets colder outside.  Just need some furniture for the room now!

We also replaced the rotten weather stripping at the bottom of the garage door...this was the 2nd attempt as a team, the 1st attempt by Hubs was unsuccessful and resulted in tearing said weather stripping in half. This stuff did NOT want to slide on easily. The door is old and bent and I'm sure the channels the weather stripping was made to slip into were filled with all kinds of lovelies.  We used soap and water, vegetable oil and WD40 to try and make this as easier job. It didn't work.  I stood on one end "feeding" it into the channels while Hubs pulled from the other end with 2 sets of pliers.  HOURS LATER it was finally on. 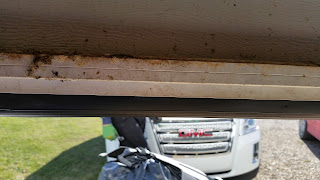 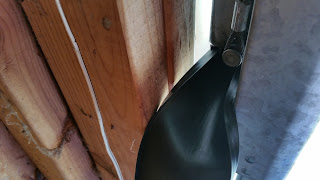 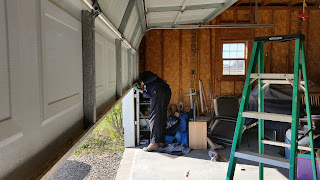 Enough of the outside.

I started decluttering the future guest room of wall decor and hanging a few things up on the walls.  Bought cord covers for the wall lights in living room over the sectional and painted them to match the wall color.  Put some items in the bookcase that faces the front door.  Hung my hand carved wood bread bowl with Command velcro strips...because it's not actually made of wood but of RESIN so I could not attach a picture hanger to the back, nails just pinged off of it.  Whatever works...as long as it doesn't fall off the wall. 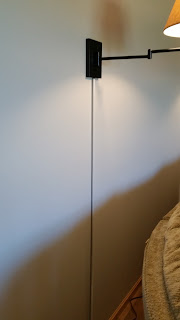 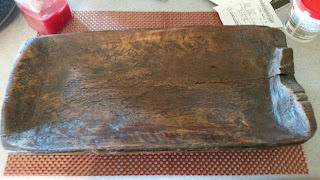 The only nails I could find without going out into the cold to the barn to hang my printer's drawer (which would be seen) was a box of roofing nails in the garage...my trusty brown and black Sharpies took care of that dull silver color fast. 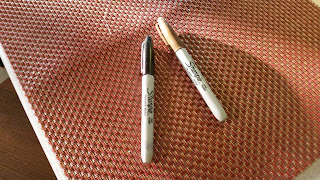 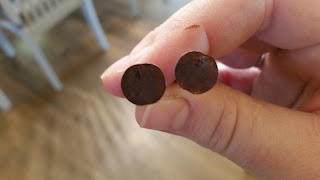 M's bed frame and legs to said bed frame...just waiting for the mattress to arrive now.

Now I can start working on the upstairs and getting M's man cave put together for him.  Not that he's complained too much about still sleeping on the floor.