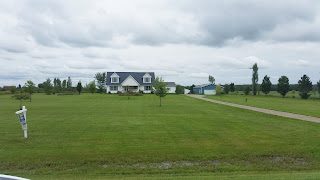 We closed on this beautiful piece of property yesterday.  Sorry for the cellphone pic but at least it isn't blurry considering it was dark, cloudy, and my tinted eyeglass lenses prevented me from seeing anything that might have been on the cellphone screen.

This adventure started 2 months ago, when we were glancing through the properties for sale online in the Thumb of Michigan in the city Hubs grew up in...and there it was.  Cape Cod (one of my favorite styles), 10 acres, large barn (Hubs dream), on quiet country roads surrounded by farmland and the Amish.

Actually, I should back up and say that this adventure began as a sudden thought after the death of Hubs (and mine) beloved Aunt Janet in March of this year due to a car accident in his hometown.  We both said at the same time to each other on our way home from her burial "we should move out here".  Her death really hit home to both of us that we needed to be closer to family, which were currently 50 miles away.  Plus the small school district is one of the best in the state for our son M. So began the perusing of the realtor websites for the area.

Hubs wasn't sold on the house after the 2nd walk through...he wanted an old farmhouse.  Who wouldn't want an old farmhouse...with a VERY large bag of money sitting on the covered front porch to welcome you, right?  And honestly there really weren't any to be found in the area we wanted to be in; they are either owned by the Amish or they deteriorated beyond repair if hadn't been lived in so torn down and a mobile home thrown up.  Or still being lived in and loved on. Our wonderful realtor C suggested to Hubs that he write down on a piece of paper what he wanted in a home since he is not a big talker.  So he did.  3 days later, as we were driving to a birthday party, he blurted out that he thought we should put an offer on the house.  "Wait a minute! 3 days ago you poo-poo'd on the house?!" I exclaimed...then started laughing.  He explained that he did what C told him to do, write down what he wanted in a house, and this house had everything he wanted except for being an old farmhouse:  location, barn, land, and BONUS that we know quite a few of our new neighbors already (his BF from high school lives at end of road).  I told him "honey, I can make this house look like the farmhouse of your dreams." And so it began...our adventure.