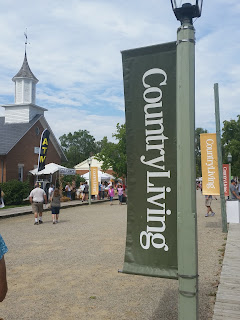 My sister "L" and I attended our first CLF two years ago, the Columbus location.  For her Christmas gift last year, I bought her and I Early Bird 3-day tickets for the 2015 fair.  We both decided that we do NOT need to come to the fair for more than one day (sorry Hubs!) due to the dent we put in the savings accounts.

Our whirlwind relocation plans were not even in existence back then and I probably should be home packing this week in anticipation of the big move but my niece is getting married in VA next weekend so I am spending the week helping L get ready for the wedding...she doesn't say no when it comes to doing EVERYTHING.

Back to CLF 2015...what a gorgeous weekend filled with beautiful eye candy.  It did not disappoint!  We unfortunately did not make it down to Columbus as planned on Thursday night so arrived early Friday afternoon, checked into the Motel Hell Days Inn across the street from the fairgrounds where it is held, and hit the dusty paths running.  Very hot.  Too many sweaty bodies.  BUT I got to see the always fabulous Beekman Boys, found the best barnwood wine rack for the new casa, and a few other goodies.  We were only going to peruse.  Yeah.  We lasted 2.5 hours and went back to the hotel to binge watch Ancient Aliens for the rest of the night, leaving the tv on most of the night to drown out the sounds of the partying construction workers next door.

Woke up bright and early Saturday morning and got into line at the fairgrounds for the early bird crowd.  While waiting in line we were blessed with Jelly Belly, Ranch dressing mix and Simple Green samples...thank you.  The organizers moved the starting line (felt like it anyways) of the early birders and that slightly ticked off a few of the shoppers who wanted to start at another point so they could be the first at the booth of their choice...because the 100 or so early birders in line were going to beat them there?  They were the only group running when we were let in.  If you ever go to a CLF, and there are 3 total right now around the country (Rhinebeck, NY, Columbus and Atlanta, GA) I HIGHLY recommend going the Early Bird Ticket route...so nice to shop leisurely for an hour and a half, with a few booths offering early bird specials, before the masses were let in.  And you couldn't get your pinky finger into some of the booths.

While we were early birding, took the opportunity to go visit my girl Cari Cucksey from HGTV's Cash and Cari fame.  She is a Michigan girl and got to know her and her husband back in March when my oldest friend of all time J and I attended her very first paint workshop at her then location near Detroit.  Very down to earth and loves her job.  And her paint line, RePupose Paint ROCKS!  I have never used a paint like hers...no sanding just like chalk paint but also no sealing almost never needed (would recommend sealing on any paint for high traffic areas).  The paint goes a LONG way, basically a 1.5 coat paint, and dries a smooth flat.  She is now located in downtown Holly Michigan so go visit her and tell her that Stephanie sent you! 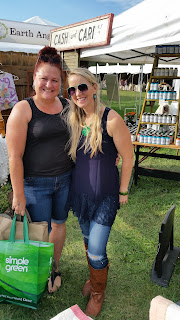 All of the goodies I bought (sorry Hubs!) are in a jumble in the back of my sister's car right now but when I arrive to VA I will get them out and take a photo of them...some of the purchases will be a surprise to me as I'm having trouble remembering everything I bought right now.  In the meantime, enjoy the photo overload of my visit to the 2015 CLF. 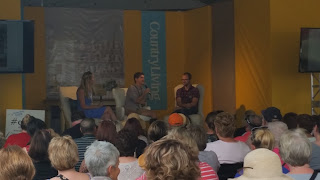 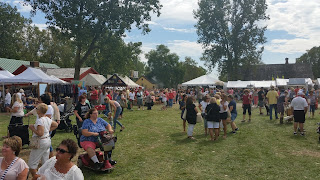 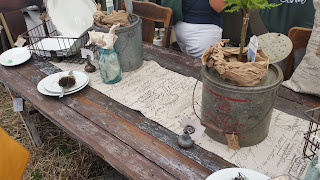 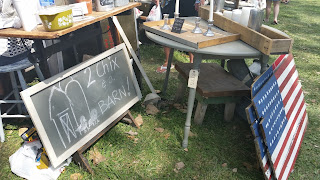 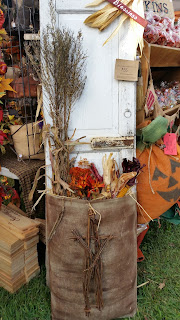 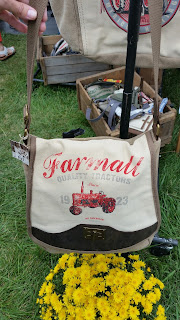 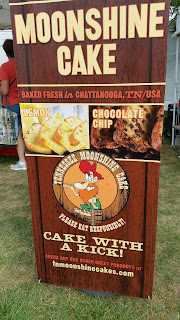 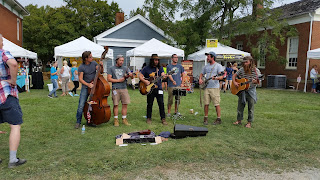 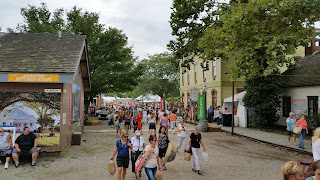 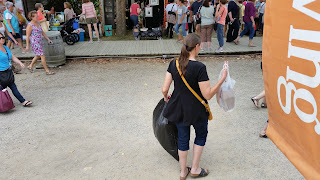 My sister and big bag o' pillows.
Posted by Unknown at 4:46 AM